Plastic diaphragms are produced using completely different technologies from paper and cardboard. An example of the production of unplasticized or rigid PVC at Klockner Pentapl ast illustrates how to set the properties of the diaphragm on a high-temperature calender recently.

The production of diaphragm materials is an established field of polymer processing because such diaphragms can be used in countless different applications. Whether it is a semi-finished product or a finished product, their vast range of improvement possibilities is to help them meet the prerequisites for most different branches of the industry. Many different process technologies have been developed for the production of plastic strip materials, which can produce suitable diaphragms for many different applications. These techniques refer to the use of slot die extrusion or blow molding, coating, injection molding and calendering.

Calendering is a processing method in which a high-viscosity polymer formulation is formed into an endless strip of material through pressure at a defined processing temperature between two or more rollers. The set gap width will determine the thickness of the resulting diaphragm. The resulting gap pressure is derived from the geometry of the gap and the rheological properties of the material being rolled. Therefore, the calender should be regarded as a processing machine used exclusively for molding purposes.

The original machine, similar to the calender, was designed before 1800 and used for the smooth processing of textile surfaces. In 1836, the calender used to apply rubber and apply rubber to textiles was granted the first patent. The requirements for higher production speeds and tighter tolerances have further promoted the development of calenders and expanded their scope of application. In addition to rubber, they can also be used for polyvinyl chloride (plasticized and unplasticized PVC). machining. The design of the first calender for unplasticized PVC, which was introduced in 1937, required heating to 220 Â° C. High-activity stabilizers were introduced around 1960, which allowed the previously used low-temperature process (LT) to be supplemented with an improved formulation and high-temperature process (HT) based on higher temperatures in the calender.

In the past few decades, the technical configuration and equipment have remained virtually unchanged. The only real change is the widening of the calender rolls to increase output or to facilitate the specialization of diaphragm production. The established technology for the production of unplasticized PVC membranes is based on HT (High Temperature Process), and the width of four- or five-roll calenders is between 1,800 mm and 3,000 mm. The advantage of the high-temperature process is that it has more options for improving the characteristics of the diaphragm, and the wider machine will also make the output larger. The materials used are mainly S-PVC and M-PVC with a K value (degree of polymerization) of around 58-63, which can produce membranes with high transparency, good deep-drawing characteristics and considerable thickness.

In terms of production and consumption, PVC ranks third in the list of most commonly used standard polymers with 28.6 million tons per year, after polyethylene (57 million tons) and polypropylene (35 million tons). In the past about 60 years, the continuous increase in consumption from the initial 10,000 tons per year to the current nearly 30 million tons reflects the continued importance of PVC for industrial development. Because it is compatible with all additives and media, PVC has established and maintained a very wide range of applications, from window frames and diaphragms to pastes and coatings.

Vinyl chloride was first produced by Henri Victor Regnault in 1835. The first industrial-scale production began at IG Farben in Germany in 1938, and at the same time in Union Carbide and DuPont in the United States. It is now produced by a method of reacting chlorine and ethylene in one or two stages. PVC with a chlorine content of 57% requires less mineral oil than any other polymer, and is industrially produced in one of the following three ways:

The choice of a particular PVC is subject to the requirements of further processing and the purchase price. S-PVC and M-PVC are very versatile and interchangeable. Due to its purity, M-PVC is often used to make transparent products.

PVC can be distinguished not only according to its production process, but also according to its material and processing characteristics (Figure 2 and Figure 3). The international standard names are PVC-U (for unplasticized or rigid PVC) and PVC-P (for plasticized PVC). As a variant of the membrane suitable for printing, rigid PVC shows the following selected features:

* High mechanical strength, rigidity and hardness,
* Unmodified form is sensitive to impact at low temperature,
* Transparency has changed,
* Good electrical characteristics in low voltage and low frequency range,
* Good resistance to chemical attack,
* It can be extinguished by itself after removing the fire source. 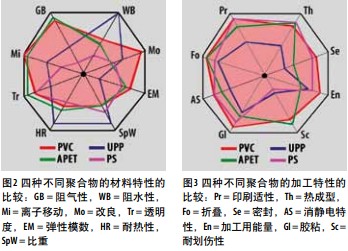 These characteristics are only a small part of the production process. The greater effect comes from additives added in further processing, such as stabilizers, slip agents, pigments, fillers and conductive agents (Figure 4). 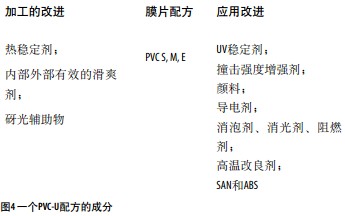 Another source of annoyance is the formation of so-called flow marks inclined to the running direction. The changing light refraction caused by an increase of about 10 microns will affect the optical quality of the diaphragm. The flow marks are caused by the non-uniformity in the kneaded polymer melt that is transported to the calender rolls, and the cause may in turn be due to fluctuations in output or temperature differences.

The current limit of thickness fluctuations for different applications is between 3% and 10% for rigid PVC membranes. Our own research shows that the thickness deviation is rarely related to the formulation.

Rigid PVC will be produced with selected glossy, matte and embossed surfaces. The surface of each film will be controlled by the corresponding matte or glossy calender roll surface or additional separate molding module, matting agent in the formulation or the temperature in the final calender roll and discharge device.

Shrinkage refers to the change in length and width of the diaphragm when it is exposed to heat. Factors that can affect contraction include:

The reason for this shrinkage is the expansion of the membrane above the so-called glass transition temperature indicating a relatively narrow phase transition range between hardness and elasticity. This expansion leads to the orientation of the molecular chain, and the molecular chain will be "frozen" in its new state when it is subsequently cooled. Later reheating at a temperature higher than the glass transition temperature will release the freezing stress and return the molecule to its original structure. The restoring force that appears reverses the original deformation and shrinks.

An important optical property of the diaphragm is its transparency (Figure 5), that is, the outline behind the diaphragm (such as the packaged goods or fonts) remains visible and can be accurately identified. Transparency is affected by the formulation, the surface of the last calender roll and the first lead-out roll, and the temperature control of these two rolls. 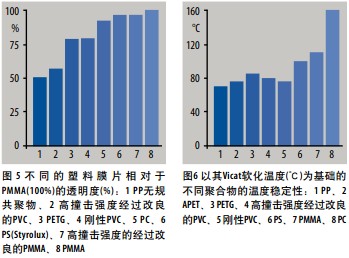 Among the many membrane defects that affect transparency include the above-mentioned flow marks, the thickness fluctuations formed by it will cause optical distortion.

Uniformity and flatness of diaphragm

The uniformity of the diaphragm can be understood as the regularity of certain optical and mechanical diaphragm characteristics that are particularly important for downstream processing such as stretching, printing, or deep drawing.

The difference in temperature, whether on the width of the roll or on the circumference of the roll, will cause thickness deviations in the form of flatness defects. The result is that the single film cannot be laid flat, and the reel film will deviate from its correctness when unwinding. Running direction. This temperature difference may also be the cause of expansion in the width direction of the diaphragm, in a manner similar to various expansions caused by non-parallel roller settings or errors in precise operation. These defects can first be shown on the edges of the ribbon membrane. If the situation is particularly serious, it means that these edges are no longer suitable for further processing.

If the flow process of the plasticizer is not smooth or the flow process in the gap of the first calender roll is too long, the residence time is too long, and the thermal load acting on the membrane will change, which will cause the change of thermal degradation. The strength fluctuations found when stretching or bending the diaphragm are proof of the heterogeneity caused by this situation in the molecular structure. In the transverse stretching, this situation may cause tearing or holes in the film.

In later processing or later use, the diaphragm is often exposed to mechanical impact stress. Their ability to withstand such stress is called impact strength, and it will be divided into different levels from fragile to high impact strength according to a rating table.

A suitable modifier (such as MBS, CPE, ABS or acrylate) can be used to change the impact strength. Their role is to strengthen and increase the K value of the relevant PVC. Optimizing the settings of plasticization and calendering processes related to uniformity and temperature control will also be important to obtain special impact strength.

The rigidity of a diaphragm depends on its modulus of elasticity and its thickness. For example, in order to obtain the same bending stiffness, the thickness of the PP diaphragm must be 1.3 times that of the PVC diaphragm.

If the membrane is to be further processed or used in the food and pharmaceutical industry, a key feature is temperature stability, such as being able to be heated in a microwave oven or sterilization process. Figure 6 shows the so-called Vicat softening temperature of various polymers. Polycarbonate is particularly suitable where such a profile is required.

The higher the permeability of a membrane (Figure 7), the lower its permeability to certain media. The permeability will pass a certain volume or amount of gas ("gas permeation") or vapor (such as "water penetration") at a determined pressure difference of the gas or vapor through a square meter with a specified thickness over a period of one day The degree of membrane penetration (Figure 8) was quantified. 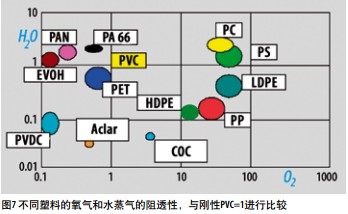 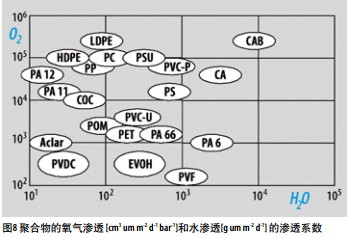