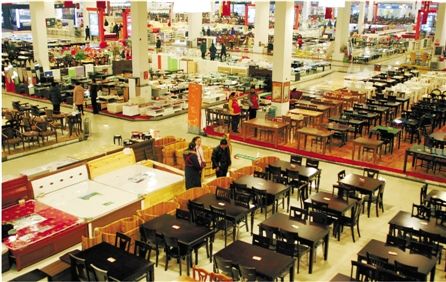 When will the Ouyida Binjiang store be evacuated? Where should the merchant go? Huang Geng, general manager of Ouyada Hangzhou Branch, replied to this newspaper: They are always working hard to promote the normal operation of Binjiang Store. Up to now, Binjiang stores are still operating normally, and they are fully committed to safeguarding the interests of consumers and distributors.

How to protect the rights of consumers who bought goods in case of withdrawal? The other party said that if the situation of the withdrawal occurred, Ouyada Home Hangzhou Branch fulfilled its service commitment and was responsible to the consumers in the end, and coordinated the home factories and dealers to properly solve various after-sales matters.

Start with the Ouyida Binjiang store.

This is the third store of Ouyada in Hangzhou, which earned eyeballs when it opened in 2011. In order to grab the beach in Hangzhou, Ouyada can be described as a "huge" investment -

The Binjiang store is equivalent to the sum of the other 2 stores, with a scale of 120,000 square meters. The daily rent here is as high as 2.5 yuan / square meter, and the annual cost of renting only the mall is as high as 100 million yuan, not including the operation management of the mall and personnel expenses.

Helpless, catching up with the poor real estate situation, the market is weak, and the high operating costs, the income is difficult to maintain the operation of the mall. As of the end of April this year, less than two years, abandoning the previous fixed investment, Ouyida Binjiang store has only a loss of more than 100 million yuan, and the operation is unsustainable. (Source: On May 9th, Ouyada Group sent the landlord â€œZhongnan Construction Groupâ€ a â€œcontact letter on negotiating and canceling the lease contract between the two partiesâ€)

â€œHangzhou home furnishing store has reached saturation, and this situation in Ouyada is also expected.â€ Yesterday, Jiang Hongyuan, president of Zhejiang Furniture Industry Association, said that a few years ago, he shouted that there was a serious surplus in the home market, but he ignored it.

A home shopping mall in Hangzhou recalled that from 2008 to 2010, it was the foreign chain home furnishing enterprises that rushed to Hangzhou. In order to seize the gold home business district and key locations, many shopping mall owners have asked for various relationships. â€œThe previous night, I talked about the daily rent of 2 yuan/square meter. On the second day, there was another door-to-door direct price of 2.4 yuan/square meter.â€

â€œBefore 2009, Hangzhou Home Shopping Mall was still relatively good.â€ Jiang Hongyuan said that at that time, a red family was basically opened, but then the whole industry was blindly expanding, and with a lot of commercial real estate boosting, the home shopping mall was provoked.

In July 2011, the Hangzhou chain of the national chain was evacuated. Just in the same building, two years ago, the "Tianxinglong" Home Expo Center opened its doors for a year. In May 2011, Hangzhouâ€™s domestic store and the old-fashioned home furnishing market in Hangzhou, which had been in operation for 12 years, closed its doors. In the past two years, there have been nearly ten large and small shopping malls in Hangzhou.

At present, there are 15 home shopping malls in Hangzhou. One-third of them lose money, 1/3 are flat, and 1/3 make money.

The mall is worried that the rent will not be received.

Home shopping malls are getting bigger and bigger, and more and more, they also have this difficult experience.

"The worse the market is, the more you have to engage in activities. You can't promote it." The relevant person in charge of the marketing department of a large home shopping mall in Hangzhou expressed emotion.

Last weekend, they made a two-day, two-night promotion, which lasted until the early hours of the morning. Of course, the effect can be: more than 20 million sales in two days.

Last year, the mallâ€™s large and small promotional activities were carried out for twelve or three games. Every time you engage in a promotion, it is the busiest day for the marketing team. "It costs a lot of energy, and the cost is quite considerable." The person in charge revealed that during the two-day event, they smashed 1 million (including advertising and subsidies to businesses), and the expenses were all self-sufficient.

After one year, this cost is at least 10 million yuan. "The direct benefit is that there is no such investment," the official said.

Unlike traditional department stores, this purely rented home mall has no sales commission. "It is clear that we are protected by droughts and floods, but the market is not good, and the business households have not paid for it. We are worried that the rent will not be received."

Therefore, every time the logic of making a special promotion is: the mall attracts popularity through promotion, the business owner has business, and the account has money, and the rent for next month will naturally be deducted.

"To tell the truth, we are very helpless in this kind of market now." Mr. Shen, the head of another home shopping mall in Hangzhou, said that despite the sluggish market, the annual expenditure is rising, and the main cost is marketing expenses, accounting for nearly 60%. . For example, a home shopping mall of 10 million square meters, the annual operating cost should be about 16 million yuan, except for property, labor, taxes, etc., marketing costs are about 10 million yuan, the situation is similar.

Most of the current home shopping malls in Hangzhou are purely leased, when the â€œtwo landlordsâ€ earn rent differentials.

â€œThis profit model is relatively simple, but it also exposes many problems.â€ Jiang Hongyuan, president of the Zhejiang Furniture Industry Association, said that the store is profitable through the rental fee, and the rent paid by the merchants accounts for 30% to 40% of the sales on average. As a result, merchants are reluctant to enter the market because of their thin profits. In addition, the mall is driving too much too fast, there are more people sharing the same cake, and less is allocated to each family.

The store has more profit diluting

In the face of the current complex home market, merchants have become confused.

Mr. Fang from Taizhou has been operating European-style homes for seven or eight years. His original words are "the years ago, sitting and collecting money. In recent years, I have been looking forward to it."

Mr. Fang currently has three stores in Hangzhou. The first one was opened in 2007. That is the best market. In less than two years, the investment was recovered. In 2010, the second one was opened, less than half a year later. Three, this time he completely "planted" into it.

â€œEuropean home investment is very big. The decoration will break into the four or five hundred thousand yuan at once.â€ Mr. Fangâ€™s smallest store has 400 square meters, and the previous investment has cost seven or eight hundred thousand. Looking at the current market, the cost recovery is far away. No time.

"The demand is just like this. There are more stores, and the guests have been diverted away." Mr. Fang said that in the past few years, he has clearly felt that the overall profit is getting thinner and thinner. â€œThere are more and more shopping malls now, and the discounts are getting bigger and bigger. Now 10% of the profits are already very good.â€

Many merchants share the same feelings around Mr. Fang. "Everyone is relying on the support, but it is only impossible to withdraw." One of his home shopping malls, the annual update rate is about 50%. â€œThere are often fresh faces.â€

[Ergonomic design]Hollin is recommended by the Ergonomics Application Association. Hollin's ergonomic design is based on the human dynamic digital model. The ridge backrest and the human spine are exactly the same. Fitting closer together helps release spinal pressure. Hollin will make you more comfortable.

[Design]Hollin is the crystallization of the common wisdom of many professionals in human body, physiologist, product designer, mechanical engineer,does its best to make every step comfortable and safe for every customer. Every small part has strict safety quality testing. Cushion impact test, handrail fatigue test, chair foot static pressure test, in line with the strict standards of office chairs

Next: Product introduction of ammonium hydroxide